Over the next few months, a sequence of events will determine the continued existence of the European Union. This year, both France and The Netherlands will hold crucial presidential elections. The rise of Alt-Right political parties in both countries such as the Front National (FN) led by Marine Le Pen in France and The Party for Freedom (PVV) led by Geert Wilders in the Netherlands could trigger the end of the European Union.

The first important test for the European Union will be on Wednesday, March 15, 2017, when the Netherlands will hold its presidential election. The anti-European Alt-Right candidate Geert Wilders has been leading all national election polls for several consecutive weeks. While his party currently holds 15 seats in the Dutch parliament, the latest poll now puts the PVV at 29– 33 seats, placing his party far ahead of the currently ruling Dutch Tories (VVD), who now consistently poll 23-27 seats. Wilders promised to hold a referendum on European Union  membership as the UK did if he wins the Dutch general election of 2017. He thinks that the European Union is obsolete and opposes all immigration policies.

“We want to be in charge of our own country, our own money, our own borders, and our own immigration policy,” “As quickly as possible the Dutch need to get the opportunity to have their say about Dutch membership of the European Union,” Wilders said.

“It is time for a new start, relying on our own strength and sovereignty. Also in the Netherlands,” “If I become prime minister, there will be a referendum in the Netherlands on leaving the European Union as well. Let the Dutch people decide,” Wilders said.

Wilders’ plans to hold a referendum represent a real threat to the European Union, but it would not be the end of the project in any case. However, what most worries European leaders is Wilders’ intentions to violate human rights and international law on a regular basis whether the Netherlands remains part of the EU or not. So far, his statements indicate that he will not step back on his intentions to start his personal crusade against refugees and Muslims. It might open an identity crisis among the European Union members. Wilders has suggested numerous times that the Judeo-Christian culture is superior to other cultures from all over the world.

“Our Judeo-Christian culture is far superior to the Islamic one. I can give you a million reasons. But here is an important one. We have got humour and they don’t. There is no humour in Islam. .. Islam does not allow free speech because free speech shows how evil and wrong Islam is. And Islam does not allow humour because humour shows how foolish and ridiculous it is,” Wilders said.

“We want to stop all immigration from Islamic countries. We want to stimulate voluntary re-emigration to Islamic countries. We want to expel all criminals with dual citizenship and deprive them of their Dutch nationality. We want to de-islamize our nation. Dear Friends, there is a lot of work to do. We, the defenders of freedom and security, have an historic duty. Our generation has been entrusted with a huge task: To oppose Islam and keep the flame of liberty burning. I say it without exaggeration: the future of human civilisation depends on us. Now is a time when everyone in the West must do his duty. We are writing history here. So, let us do our duty. Let us stand with a happy heart and a strong spirit. Let us go forth with courage and save freedom,” said Wilders. 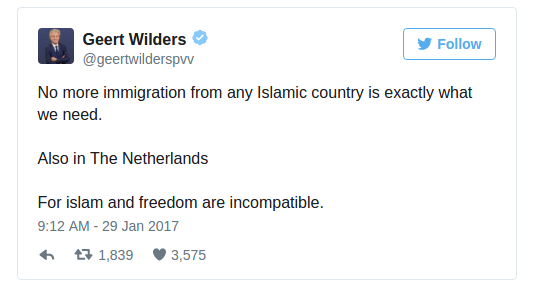 A few months ago, Wilders was found guilty of inciting discrimination against Moroccans.

“The Netherlands have become a sick country.” “I am not a racist and neither are my voters. This sentence proves that you judges are completely out of touch. Support for the Party for Freedom is stronger than ever and keeps growing every day. The Dutch want their country back,” Wilders said.

“Today I was convicted in a political trial which, shortly before the elections, attempts to neutralise the leader of the largest and most popular opposition party. But they will not succeed, not even with this verdict, because I speak on behalf of millions of Dutch,” Wilders said.

The second and most important test for the European Union will be the 2017 French presidential election.The first round will be held on April 23. If no candidate wins a majority, a second round between the top two candidates will be held on May 7.Until a few days ago, François Fillon, the Republicans (LR) candidate was considered the favourite to win the two-round presidential election in April and May. However, his implication in a fake jobs scandal related to payments to his wife from MP funds has all but eliminated his chances of success. Marine Le Pen, the National front (FN) candidate is now, the favourite to win the first round of the election. A victory for her in the second round would represent a real threat to the EU. Le Pen wants to leave the European Union and it could never exist without France (one of the co-founders). She stated:

“No, I think we need to renegotiate with the EU because I want to see French sovereignty restored in France, supported by a referendum.”

“If I am voted in, I will announce that a referendum will be held in six months time. I will spend those six months going to the European Union and telling them: ‘I want the French people to regain at least their territorial sovereignty because I want to control the borders – they don’t belong to you.’”

“The EU is deeply harmful, it is an anti-democratic monster. I want to prevent it from becoming fatter, from continuing to breathe, from grabbing everything with its paws and from extending its tentacles into all areas of our legislation. In our glorious history, millions have died to ensure that our country remains free. Today, we are simply allowing our right to self-determination to be stolen from us,” Le Pen said.

Even if France remains in the EU, Le Pen would still represent a real threat to the EU. Like President Trump, Le Pen is also willing to violate international law to start her personal crusade against immigration, Muslims and Islam.This would violate all European values and human rights which could accelerate the disappearance of the EU.

“The progressive Islamisation of our country and the increase in political-religious demands are calling into question the survival of our civilisation,”said Le Pen.

“For those who want to talk a lot about World War II, if it’s about occupation, then we could also talk about it (Muslim prayers in the streets), because that is occupation of territory,” she said at the gathering in Lyon.

“There are of course no tanks, there are no soldiers, but it is nevertheless an occupation and it weighs heavily on local residents,” said Marine Le Pen

In conclusion, this year will be full of threats and challenges for global society.The potential disintegration of the European Union represents one of these, but no one knows how it will end. History is full of threats and challenge that are often happily resolved. The elections in The Netherlands and France will be all about choosing between tolerance or intolerance, war or peace, friendship or enemies, future or past…Their citizens will have an enormous advantage since they can see what Trump is doing in the U.S. and based on that they will make an important decision that will change the world for the better or worse. Whether the European Union changes or not, what’s most important is that citizens will have the last word. Whatever your decision will be….Remember to think critically…And stand up for human rights.

6 thoughts on “Will 2017 Be the Beginning of the End of The European Union?”