In a brief press conference, Trump assured the American public that the strike was in retaliation for the last chemical attack against innocent civilians in Khan Sheikhoun in north-western Syria, which caused as many as 80 casualties, including many children.

Despite the fact that the UN could not reliably determine the accountability of the Syrian regime over the chemical attack, the U.S. government and the mainstream media launched a campaign to accuse them.

Ignoring the resolution of the UN, the NATO and other allies expressed their support for the strike and said that it was proportional. On the other hand, the Russian government condemned the attack and said that the U.S. is helping terrorists on the ground. Furthermore, the Russian Army announced the cessation of its communications with the U.S. in Syria and reiterated its support for the Syrian regime.

48 hours after the strike, in a joint statement, Russia, Iran, Hezbollah, and several local militias said that the U.S. had crossed the line and that the next time they will respond with force. According to this coalition, there are many reasons to think that the U.S. wants to exert utter control over Syria due to its geolocation.

Everyone still remembers, when in 2003, at an assembly of the UN, the then U.S. Secretary of State, Colin Powell, assured that the Iraqi government had WMD, which could soon cause carnage in the region and perhaps worldwide. As a result, the international community created a coalition to invade Iraq, which caused as many as 1 million of deaths. It was not until after some years that the international community found out that the CIA deliberately fabricated that story to intervene in Iraq.

By attacking Syria, Trump has gained as much popularity as Bush did during the Iraqi invasion. Since the strike, the mainstream media, including the most critical such as CNN, and The New York Times have praised Trump’s military action and elevated him as an excellent President.

It is deeply troubling that Trump has found out the key to gain popularity. Due to his incapacity to govern the country, it appears that he will launch more military interventions in countries such as North Korea and Iran.

It is important to remember that for years, Donald Trump suggested that Obama’s intervention in Syria was a political move to gain popularity. However, he is now adopting the same ploy. Fortunately for everyone, he could not delete his past tweets and here there is a sample of them: 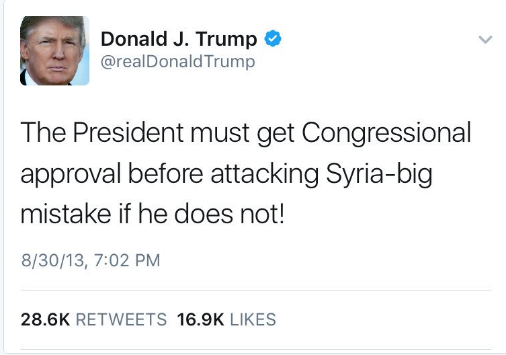 Despite the complexity of the Syrian conflict, this will only end when all parties negotiate a realistic resolution. Apparently, Trump is not willing to do so, but a strong antiwar movement may force him (like in the past with previous administrations) to step back in his bellicose decisions.

While the U.S. antiwar movement is organizing to become stronger, Trump is deploying warships, and troops in the Middle East and the Korean Peninsula. Over the next months, the world will observe whether the antiwar movement succeeds or Trump causes chaos everywhere.